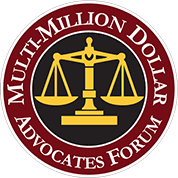 Call for a FREE Consultation

"I believe in doing some very basic things that can mean the difference between a successful and
unsuccessful experience with a personal injury law firm."